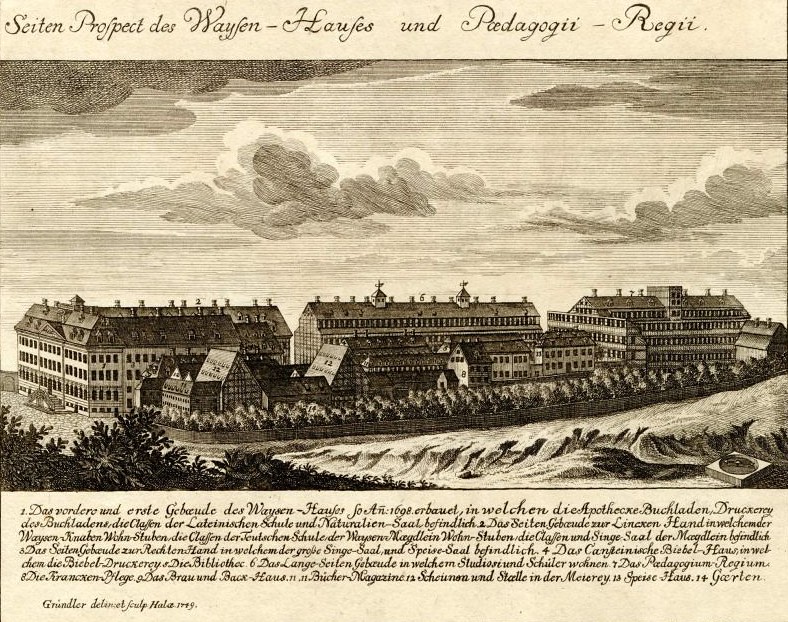 In the wake of the revival of the Francke Foundations in Halle on the Saale in 1992, a town close to Berlin in the former East Germany, the curiosity cabinet of the pietist school and orphanage was restored. In the 18th century, the Francke Foundations comprised a conglomerate of schools for students of all abilities and social backgrounds. 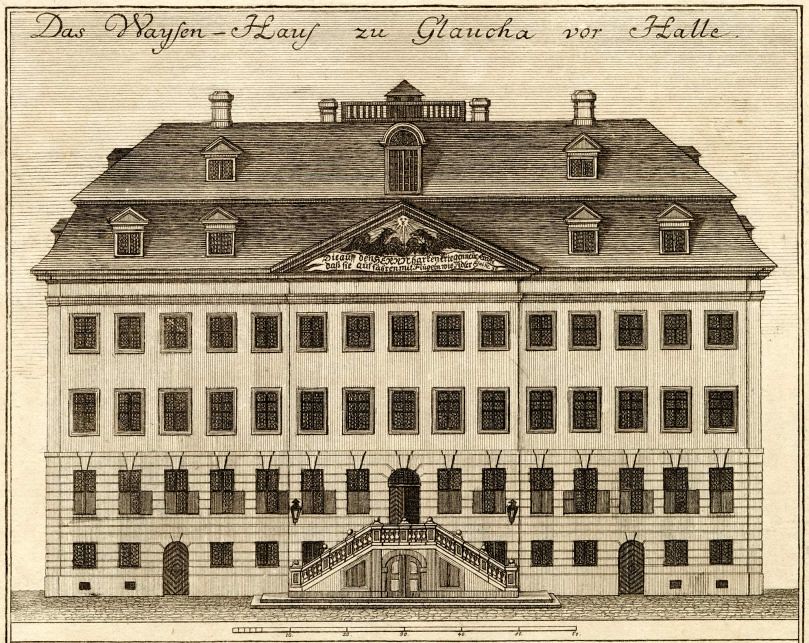 The room that contains the collection, in fact, the attic of the Orphanage, is now in a state similar to that of about 1741, when it was set up with beautifully decorated display cabinets (Müller-Bahlke, 1997, 1998, 2012). On one side of the room are specimens of nature; on the other, handicraft products from all over the world. In the middle of the room is a rotating hand-cranked mechanical model of the world with a diameter between two or three meters, which shows the Tychonic universe with the earth in the center. The collection at the Francke Foundation is not a curiosity cabinet of princely provenance, of the sort that has been extensively investigated in recent years, but rather a teaching collection, a type of cabinet that was not uncommon in the early modern era, but which has received comparatively little attention. 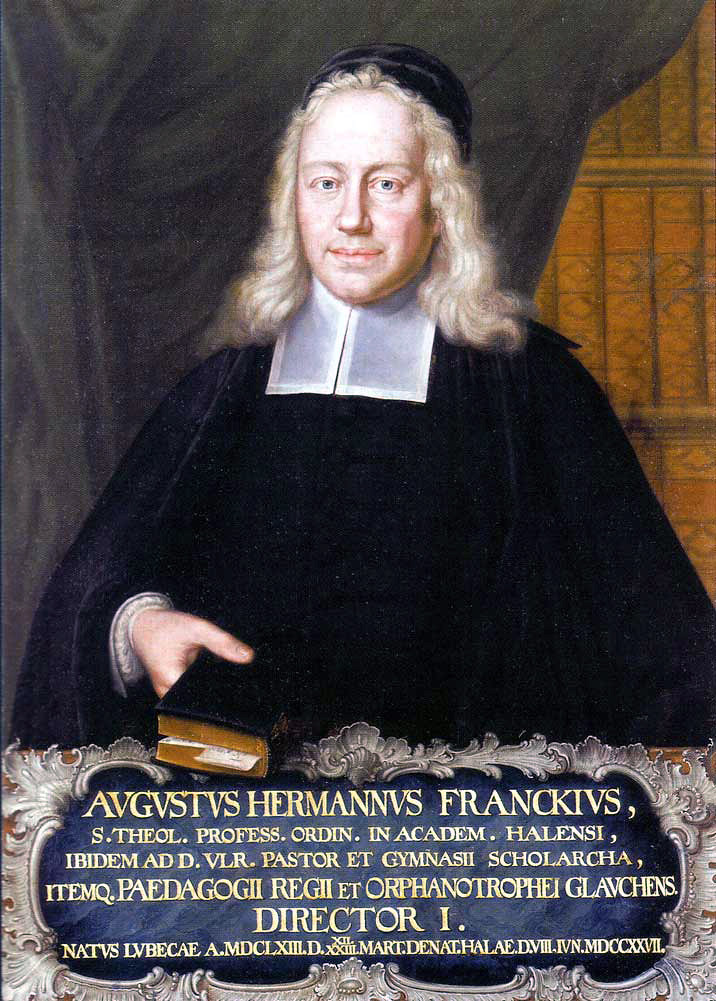 The Francke Foundations were established in 1698 by August Hermann Francke, a pietist professor of Theology at the university of Halle. He intended them initially as a charity school and orphanage. They developed quite rapidly to a group of first-class pietist-run schools that instructed the children from first-read-practice to university. Not only staff teachers, but also students of the nearby Halle University taught there, the latter in exchange for food. Throughout their history, the Francke Foundations maintained a close relationship with the University of Halle.

In her essay 'The Model that Never Moved: The Case of a Virtual Memory Theater and Its Christian Philosophical Argument, 1700–1732' Kelly Whitmer (2010) stresses the central position of a mechanical model that the theologian Christoph Semler (1669-1740) constructed for the Cabinet 1717-1718. It was a reconstruction of the temple of Salomon in Jerusalem. In Whitmer's eyes, the model served as the ultimate metaphor for the whole idea of the Francke Foundations. Pietist friends and students would have the opportunity to come from all over the world to this temple of learning. The interpretation bears truth. In the 18th century, the Francke Foundations had a mission together with Denmark in India, the Danish-Halle Mission (1706-1845), and from 1733 they were intensely entangled in church work in the German parishes of Philadelphia in the American Colonies. Letters between the station in India and the pietist center in Halle contained not only information in written format, but also objects. They included cultural objects like cutlery or clothing, samples from nature, like minerals or corals from the Indian Ocean near Ceylon, seeds and other plant products. Seeds and little plants were not displayed in the cabinet but planted in the gardens of the foundations, as for example the mulberry tree seeds that came from India to enhance the production of silk in Prussia, nurturing silkworms (Helm, Klosterberg, Klosterberg et al.).

Aquisitions, exchange and donations towards the art- and natural cabinet were usually part of negotiations between Francke and his successors and personally known sponsors, often parents, who had sent their children to school in Halle, or colleagues at other institutions. In 1741, Andreas Wedel enrolled as a student in the Latin school of the Francke Foundations. He brought with him a gift to the cabinet that his father had manufactured during his office as a pastor at the German North Frisian Island Amrum. It consisted of puppets sculpted from live models that were dressed in ceremonial clothes from the North Frisian islands Sylt and Föhr. Four of his puppets are still in their original place at closet XIV, where foreign clothing was displayed. Already in 1741, puppets in this display case included samples from India, Turkey and Hungary.

Two colleagues of Francke were especially helpful in shaping the collections in the early days. In 1715 and later, Francke bought the entire school collection that the Halle theologian, physics and mathematics teacher Christof Semler had constructed for his own project of Realschule in the beginning of the eighteenth century. It contained mathematical and astronomical models, as well as wooden models of working apparatus, like turnery benches. Later, Semler produced models directly for the Francke Foundations, like the mechanical armillarsphere, or the temple of Salomon. From 1698 to his death in 1741, Friedrich Hoffmann, a Halle university professor of medicine, personal friend of Francke and great collector himself, helped with his connections to acquire objects for the collections, especially exquisite minerals. He also contributed towards writing textbooks to teach anatomy and botany. The new organization of the arts and natural cabinet in the attic of the orphanage, partly based on the new Linnean principles, is due to the work of the artist and natural philosopher Gottfried August Gründler (1710-1775), who built the wooden cabinets 1737-1741, long after Francke's death.

The online database of archival manuscripts at the Francke Foundations gives an overview of the extent of the network of letters around the Curiosity Cabinet of the Francke Foundations. Between 1698 and 1799, about a hundred letters sent to Halle were directly connected to the natural cabinet. Most of them accompanied natural or artificial specimens sent to Halle with the explicit aim of being displayed in the cabinet. Table 1 shows the places, from which the letters were sent: donations from other cabinets, for example duplicates of whale penises, as well as ore samples were sent mainly from neighbouring places in Prussia and other parts of the conglomerate of states that the Paris publisher Guillaume de Lisle called in 1701 L'Allemagne. Sometimes, the ore samples were sent by explorers directly from neighbouring mines. 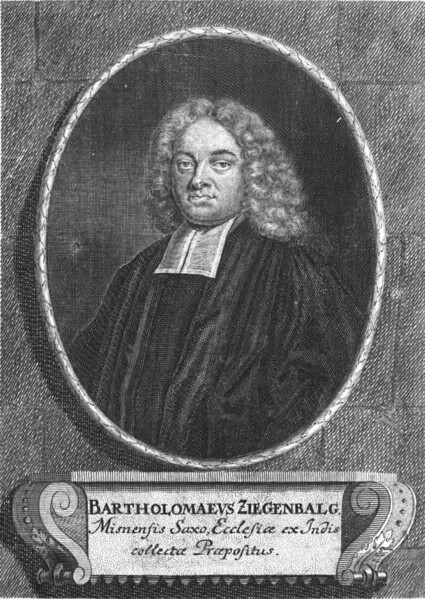 Next to the regional goods stood exotic objects from far away: The mission station in Tranquebar (today: Tharangambadi) in south India at the coast facing the kingdom of Kandia (today: Sri Lanka) sent cultural and natural exhibits to the cabinet (Rieke-Müller). They are documented in 16 letters between 1706 and 1744; and 22 letters between 1775 and 1794 (Manuscript Database Website). Objects specially aimed at the cabinet from India were mostly exhibits from the worlds of plants and sea plants, for example one herbarium gathered by the Halle missionary Bartholomäus Ziegenbalg (1682-1719) at Tranquebar from the nearby ocean (Inventory of the Cabinet, 1741), but also cultural objects such as Indian palm tree leave manuscripts, documented in 1781 and 1743 (Manuscript Database Website, Archival Database Website).

It is a paradox that a religion like Pietism, which is purely spiritual, give such great attention to objects to not only foster one of Prussia's earliest museums, as Thomas Müller-Bahlke pointed out the cabinet's function in 1998 (compare also the recent works of Shantz and Zaunstöck et al.), but also for the use of its collections for cutting-edge classroom practice. The development of the Realschule, a new type of secondary school leading towards engineering, the crafts, and the arts, thus all disciplines that are non-universitarian, and work with materials, is due to this Pietist hub. The first long-lasting school model, after attempts at Halle, was the Royal Realschule at Berlin, founded by a former teacher of the Francke Foundations, Johann Julius Hecker, in 1747.

There have been single attempts to explain this phenomenon: 1. The missionary work in India had from its beginning, a strong scientific and explorative background, partly due to the interest of the British Royal Society. The objects sent from India to Halle reflect this interest. 2. The Prussian kings of the 18th century, foremost Friedrich Wilhelm I and Friedrich II, were interested in making the crafts, mining, and agriculture more efficient by adapting scientific methods. The whole science of economy had as its background explorations of nature and its use. The Francke Foundations had to raise money to finance themselves, and they had children to educate that were not particularly adapted to university studies, so they might have embraced directives from the developing sciences of cameralism (that integrated studies of agriculture, mining and economy) as a welcome solution for their financial and educational questions, fostered by the new politics. Parts of the collections, such as the craft models, botanical and mineral specimens have catered to these goals. 3. Apart from Francke himself, single outstanding personalities helped to shape the direction of the Francke Foundations, who happened to be not only Pietists, but also collectors and producers of mathematical and craft models, like the Theologian Christoph Semler, or collectors and vivid taxonomic discussants of natural goods, like the medicine professor Friedrich Hoffmann. As Whitmer has worked out, many of the founding colleagues had a strong mathematical-geometrical and astronomical-background, and all believed in visual forms and aids of educational explanation.

Taken together, these single considerations form an interpretive network, which reveals the Francke Foundations as an institution of strong Pietist belief that was nonetheless deeply rooted in political, scientific and social movements of their time. The collections are an expression of this very successful bifocal character.

4) Portrait of Bartholomäus Ziegenbalg, who was as a Missionary in Tranquebar and sent back biological specimens to Halle.